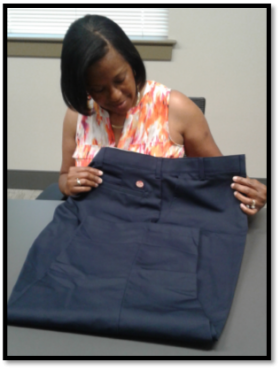 What happens to Phoenix uniforms after they can no longer be used by the employee? The answer used to be that they were trashed. Now the answer is that they are being used by someone who needed affordable clothing.
At the beginning of every year, all Phoenix custodians and grounds workers are issued five sets of shirts and pants. Old uniforms are returned when a person’s employment ends.
As a project manager for Phoenix’s Service division, Irene Fullenwider manages the distribution of uniforms and processes all returns. Irene has been with Phoenix since 2007.
Until about two years ago, old uniforms were trashed. But Irene said she noticed that she was meeting a lot of people who needed uniform pants.
Many other companies, just as Phoenix does, requires that their employees wear a uniform. Unlike Phoenix, some of these companies don’t give their employees work clothes free of charge.
Irene knew it was a waste to throw away used uniforms that were still in good condition.
“My mother raised six kids by herself,” Irene said. “To see stuff just tossed away, as though no one needs them – I know someone can use that stuff.”
So Irene went to her boss, Bryan Dingo, Phoenix’s Asst. VP for Government Services, with the idea of donating the old uniforms to the Salvation Army. Dingo loved it and took it to Phoenix CEO Bryan Dodson, who gave his enthusiastic approval.
Now, every four months or so, Irene takes home the collection of 20 pants and a few shirts that she gets back from employees. She washes and dries them, folds and packages them, and then takes them to the Salvation Army.
Unlike individual donors, Phoenix does not get a tax write-off for these donations. “We don’t get (tax) credit because we are a non-profit,” Irene said. So the 80 pants and 20-25 shirts Phoenix gives away through Irene’s efforts are a gift to the community.
And about those Phoenix shirts with the logo on them: Irene removes some of the lettering by hand and covers up the rest with iron-on American flags. So if you see a shirt that looks familiar with a flag where the logo would be, it’s probably a recycled Phoenix shirt purchased by someone in need at the Salvation Army.
Irene said she hasn’t yet bumped into anyone on the street wearing any of the clothes Phoenix has donated, but it could still happen one day.
“It would feel good to see that,” she said.