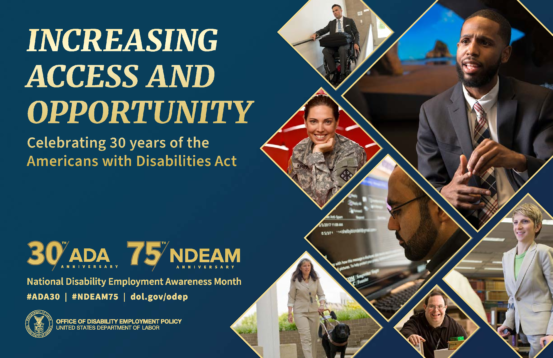 On October 20, 2020, Phoenix was proud to host its first virtual conference.  The online experience was a celebration of the 30th anniversary of the American’s with Disabilities Act (ADA) and the 75th anniversary of National Disability Employment Awareness Month (NDEAM).

Despite a pandemic, Phoenix embodied this year’s NDEAM theme: increasing access and opportunity.  Over 100+ participants heard from industry NDEAM leaders and ADA subject matter experts.  Viewers were able to relive history as they watched the “Signing Ceremony” of The Americans with Disabilities Act in 1990.  The two-hour event provided insight and heartfelt testimonies of the importance of these two milestones.

Here are 3 fun facts shared during this year’s conference:

Revisit these facts and view the entire conference by clicking "play" on the recording below.

Phoenix was also joined by the Mayor of Huntsville, Tommy Battle, on October 1st.  Mayor Battle read a proclamation to declare the month as National Disability Employment Awareness Month for the city.

Take a listen to the proclamation at the 11:30 minute mark below.

Phoenix would like to acknowledge and thank the following speakers and participants for celebrating with us in October: