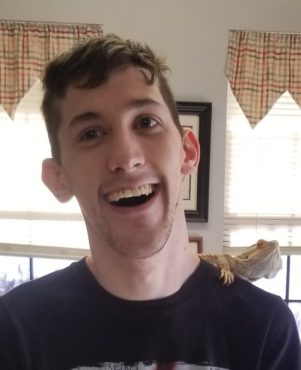 Lane Allen is 24 years old and lives in Jasper, Alabama (Walker County). He and his family recently moved from Dora, which is where he returns every Monday, Wednesday, and Friday to work atthe Sumiton Animal Clinic. Lane came to Phoenix in October of 2018, diagnosedwith Attention Deficit/Hyperactivity disorder (ADHD), which is a brain disordermarked by an ongoing pattern of inattention and/or impulsivity that interfereswith functioning. He is also diagnosed with Cerebral Palsy, which is acondition marked by impaired muscle coordination. Lastly, Lane has Epilepsy,which is a neurological disorder that causes seizures or unusual sensations andbehaviors. Lane is non-verbal, but he will tell you that he has “fast fingers”and can respond to anything on his iPad or phone! Lane Allen is just like other24-year-old young men in that he wants to earn a paycheck and he loves spendingit on Amazon! Lane loves music, especially rock and roll, gothic rock, and heavy metal. On the day I met him, he was dressed appropriately in a “Journey” t-shirt, so he embraces classic 1970’s rock androll! Lane has one younger brother and he has four dogs at home that he deeplyloves. Lane routinely helps to take care of them, so working in an animalclinic seemed a natural extension of his interests. Lane’s job coach quickly learned that Lane was good at data entry so she decided that customized job carving was going to benefit both Lane and the employer that agreed to get creative! Robinat Sumiton Animal Clinic is the office manager and she is the Department headof the Jasper Chapter of the Forgotten Tails Rescue. It was Robin that said“yes” to job carving. Lane currently volunteers his time three days a weekwhere he is responsible for inputting data on over 100 stray animals into aspreadsheet. He documents shots and current medications, such as V5L(Parvo/Distemper), Rabies, Heartworm, Droncit (Treats parasites), and Panacur(Dewormer). He notes spay/neuter status, heartworm treatments and has learnedto decipher many medical abbreviations. Lane is learning the clinic animals,which requires documentation that is more extensive and he continues to grow inhis duties. Lane is supportive of the animals coming in and he has been knownto use his free time to sit with, and comfort, rescues that seem to bestruggling. When Lane first started, he worked in the kitchen area, but staffquickly recognized his value and created an office space exclusively for him.Robin reports that staff seek Lane out because he is always hard working,pleasant, and always adds joy to those around him. Sumiton Animal Clinic ismoving forward in hopes of hiring Lane but the opportunity they extendedillustrates what an asset they believe Lane will be to their organization. Athome, Lane’s mother has been pleased to see how much more socially confidenther son has become since he began work at the Animal Clinic. In closing, I asked Lane what was the most difficult part of his job. He saidlearning the abbreviations was hard but reading the Doctor’s handwriting wasthe worst! I asked what the best part of the job was. Lane said it makes himfeel good to be good at something. What a simplistic expression of why time,patience, creativity, and willingness to try something different pays off!