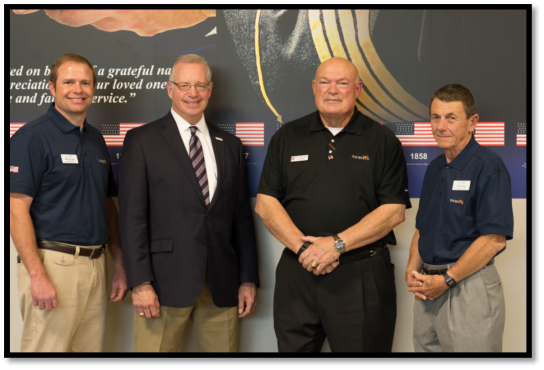 On June 9, Phoenix hosted its biggest party ever. It was the celebration of its 2 millionth flag rolling of the production line.
Phoenix CEO Bryan Dodson led the short program, which also featured remarks by Alabama Speaker of the House Mac McCutcheon, Phoenix Board Chair Mitt Merritt and Source America President/CEO Steven Soroka.
“The quality and care you stich into those flags is more than a commodity to be sold,” Soroka reminded those in attendance. “It represents the fabric of the veteran’s experiences. It is the smell of jet fuel. It is blisters from new boots. It is the smile of a loved one at a welcome home ceremony. It is the laughter of unit friends. It is a ‘24/7’ lifestyle. It’s waiting to deploy on the tarmac. It’s boarding the ship. It is new duty assignments. It’s endless hellos and goodbyes. It’s the worst assignment ever. It’s the best assignment ever. It’s everything in between ‘I solemnly swear’ and ‘Thank you for your service’.”
Soroka is Navy veteran, something that Army veteran and Phoenix CEO Bryan Dodson jokingly agreed not to hold against him.
Phoenix is one of a handful of companies that makes interment flags under a contract with the Department of Veterans Affairs. Each flag is made to specifications outlined by the VA, and are large enough to drape the coffins of deceased veterans who served our military honorably. Flags also are presented during memorial services for honorably-discharged veterans whose remains have been cremated. Following the services, the flags are given to the veteran’s next-of-kin as a keepsake.
“We count it a privilege to help honor these men and women who have served our nation,” Dodson said.