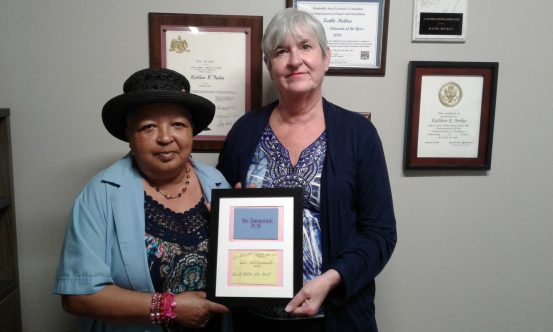 A grandmother’s love is the only love that rivals the love of a mother. Distilled by years of experience, it gushes with unbridled affection and pride. And it was grandmotherly love that connected Phoenix employees Kathi Meikus and Lidia Mercado back in 2008.

She went to Lidia, Phoenix’s resident embroidery expert, for help. Kathi explained what she wanted, and Lidia got to work.

“It meant so much to Kathi,” Lidia recalled recently. “I was honored that I was doing it.”

Lidia, who also is a grandmother, could relate to the excitement and pride that Kathi felt. Creating the stitches that would transform the little lab coat into a personal gift for a grandchild was an act of love for two grandmothers, not just one.

Fast forward nine years. Lidia was doing some straightening up in her work space when she found the sample stitching she did for Savannah’s doctor’s coat. As she looked at it, she remembered how special it was to embroider the little coat, and how much it meant to Kathi.

“I can’t throw that away,” Lidia said about the swatch of stitching. “That’s Kathi’s story.”

So Lidia did what any loving grandmother would do: She preserved the precious memory of Kathi’s gift. She also had the original note Kathi had given her to explain the job, so she framed both of them and presented this new gift to Kathi.

Phoenix’s motto is “rising above and going beyond.” Lidia definitely went above and beyond in preserving this special memory for Kathi.